There are many options. Food folate (not synthetic folic acid), magnesium and black seed oil and whole food probiotics are major health supports to counter cancer of any kind, but specifically colon cancer.

There are a lot of people with questions about kefir and I hope for Kefir in Every Cupboard! So, I've found a way to share information and answer questions about Making Kefir!

On 10/10/10, Heal Thyself is hosting a BIG Sharing Cultures Event. If you have kefir grains growing out of your ears by now, please share them on! Consider posting in the regional forums offering whatever cultures you have available which you'd be willing to share locally or mail regionally to other members of Heal Thyself!

It should be cool enough to mail them! Here are instructions…

The Lara bars have inspired me. I have a gorp mix which I take whenever we leave the house - instant portable nutrition. So, I finally made the Lara bars with dates (remember to remove the seeds, they are hard on your food processor. ask me how I know...) and tossed in my gorp mix. OH MY!! fabulous!! delicious!! Amazing!

There was some old Chinese theory of food that we should eat a variety of 31 different foods every day.

So, I counted and there were 15 different…

For starters, wounds that bleed well are hardly at risk of tetanus. Tetanus only grows in an anaerobic environment. For any future ACTUAL tetanus exposure, Immuoglobulin could be offered at the time of any serious injury. It would only be offered IF it were a very dirty cut, which hadn't been cleaned for a long duration, or a crush
injury. Developing tetanus is quite difficult unless…

Bifidum is in some honey and in breastmilk. Otherwise, I have heard there isn't another natural source. The "source" for inoculating our human gut at birth is breastmilk. Proper ph…

While researching for my mom who had pancreatic cancer, I learned about Nigella sativa. If you don't know of it, it is an old traditional middle eastern medicinal food called black cumin seed. Here is a bunch more of the research I found about the health benefits related to pancreatic cancer.
http://www.ncbi.nlm.nih.go…

What is Colgate Total toothpaste? - The unique formula of Colgate Total, containing fluoride and the antibacterial ingredient triclosan !! TRICLOSAN, unbelievable!

Yeast means several different things. Basically, there are good yeasts and bad yeasts. And there are live yeasts and dead yeasts.

"Yeast" collectively isn't the problem. There is (dead) yeast in (some) bread for instance and there is (live) yeast in (some) yogurt. Dead yeast are not the issue with bread. Bread breaks down rapidly into simple carbohydrates which feed "bad" yeasts in the gut and body. The "pathological" yeasts are commonly candida albicans. But simple sugars, not…

I've not used kefir starter as it only has 7 microbials and REAL kefir grains have 56+ beneficial microbials. Kefir grains are free, or less than $15, all over the internet for a lifetime supply.

Tuna and mercury, and green tea!

"White/albacore tuna in water" contained the highest amount of EPA/DHA (Omega 3 fatty acids) among the canned tuna but mercury levels were four times higher than those in "light tuna in water".

EPA/DHA amounts were higher in salmon and mackerel which contain less mercury than canned tuna product.

This *in vitro* study, looks at "Dietary mercury exposure and effects of foods containing phytochemicals on mercury bioavailability". (basically which foods make you absorb less… Continue

Medicinal Mushrooms by Christopher Hobbs - for over 3,000 years the Chinese have used and revered many fungi for their health-giving properties, especially tonics for the immune system.

Shiitake - Medical uses: A vast amount of research into shiitake's medicinal properties has been completed and shows that it has the ability to fight tumors and viruses and enhance the immune system.

I do not supplement Vit D3.

Breastmilk is best. :-) We had to 'borrow' some from a lactating friend once for just this reason. Kinda have to be good friends, lol. It'll keep refrigerated and fresh for a few days, if you aren't using it from the "tap".

I've read that a particular antibody in the breast milk, called immunoglobulin A, prevents the pink eye bacteria from attaching to the mucosal surface of the eye. I had pink eye as a nurse. I was able to work without taking any antibiotics, with strict… Continue

Phytic acid is intentionally consumed by some people because of the potential cancer-retarding benefits and diabetic benefits ("antioxidant"). However, the phytic acid retards mineral bio-availability, especially important minerals such as calcium, magnesium, iron, and zinc.

Here is Amanda Rose on an informative video about the pros/cons and particulars of phytic acid consumption.…
Continue 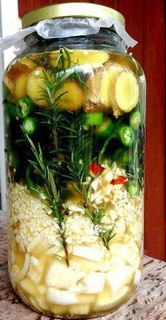