Your Doctor Shouldn't Be The Authority On YOUR Health 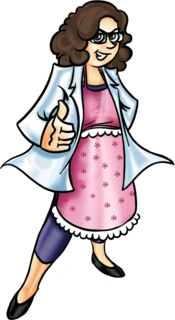 You don't know me and that my avatar is wearing a lab coat should NOT make me authoritative! But in my opinion, your doctor shouldn't be the authority on YOUR health either. *You* should be. You should investigate everything both I AND that your doctor says yourself.

I learned this when I was first diagnosed with diabetes back in graduate school. As a PhD candidate in biochemistry, I had access to a huge research library, so I read a LOT.

And I asked my doctors questions and they didn't know as much as I had learned. Why should they? They didn't have diabetes.

When I had my heart attack, I knew nothing about heart disease and yes, I vaguely thought it was related to cholesterol (though mine had never been high!) and blood pressure (that HAD been high for a long time). And once I had the heart attack, I was on morphine for almost two weeks, so my research skills were pretty darned limited! I did what they recommended. I had the angio, and when that couldn't clear the blockage, I had the CABG. I took all the drugs they told me to. When I left the hospital I was on 7 new prescriptions, including Percocet which continued to limit my ability to learn.

I was told after the CABG, it would take me three months to recover and be back at work. It took me longer than that to be able to get out of bed on my own, and I was mostly bedridden for over a year. I was seeing an internist, a cardiologist and an endocrinologist, and I did everything they told me to for a year and I remained bedridden.

See, when the surgeon told me I'd recover in 3 months, she based that on what she knew, what was normal. But it wasn't what happened to ME. It's really just like statins, MOST people do not end up permanently in a wheelchair from them. But your doctor doesn't KNOW if you are one of them.

I didn't know that the first time I spoke to my cardiologist after I got home. But I asked quite a few questions. Why am I on a beta-blocker if they cause insulin resistance which I already have? So he switched me to another one without that side effect. What exactly does interfering with my liver's production of cholesterol do to all of the hormones made from it, what happens to my cortisol, DHEA and aldosterone levels and sex hormones? He said he didn't know, but it was a good question.

At a later visit, when I knew more about the side effects of statins, I asked why aren't I on Niaspan instead, which both lowers the bad cholesterol and raises the good stuff and has been on the market for 3 decades instead of being a relatively new drug? So he switched me.

At a MUCH later visit, having collected all my hospital records and labwork from many years, I asked why I'd ever been on a statin at all since I'd never had high cholesterol? And he said they just put everyone on it.

But, I am not everyone, I am me. For example, I don't care about the glycemic index, it makes no difference to me what the average effect a food has on the blood glucose of a large group of strangers, what matters is what effect it has on ME. I'm not trying to manage THEIR blood glucose! I can learn from other's experience and from research, but it comes down to what works for ME.

I did research myself in two basic directions...

First, I became obsessed with preventing heart disease. Because I didn't want this mess happening to me again! The thing about medicine is it's a slow process, research gets done first, then things make it into practice, and eventually the medical schools are teaching it to the new doctors. I was desperate and wasn't willing to wait several decades until medicine caught up with what was known, not when Pubmed put more research articles at my fingertips than I'd EVER had access to in graduate school!

(I originally got the recommendation to NEVER take a statin without CoenzymeQ10 from a cardiologist. I looked into it, and do not agree. It helps with some of the side effects, but not all. And while the side effects are rare, sometimes they are utterly devastating. I would NEVER take one again with or without CoQ10. But if someone I loved believed their doctor over me, I'd definitly push the CoQ10.)

But secondly, I researched about health in general, which led me to realize a LOT of stuff about diet. Low-carb all those years wasn't good enough - I needed to eat real food.

The first thing I experimented with was raw milk, and as I said I lowered my bp HUGELY when the beta-blockers and ace inhibitors never did, even with larger and larger doses over years. I had actually run out of my prescriptions when I started on raw milk, and my bp normalized! It was high-normal, but better than it had ever been.

Potassium fixed it down to where it is now - 120/70 usually. I needed large doses of K to replenish my stores (both low-carb dieting and insulin cause potassium loss). But I mostly maintain by eating half my diet as non-starchy veggies - absolutely necessary to even get the RDA for potassium!

If I knew a couple decades ago what I know today - I'd not be here posting this now. Because my husband and I would have achieved our dreams of homesteading and I'd be busy milking a cow, slopping the pigs, feeding the chickens, tending the plants in my greenhouse and feeding our woodburning stove. I'd have my dreams and be entirely too busy to write long posts on Facebook!

And if I DIDN'T know what I do know, I'd also not be posting this, because I couldn't sit here and type this long 3-4 years ago.

I want to make real food easy and accessible to everyone, whatever their lifestyle. I want single mothers on food stamps, graduate students working 100-hour weeks, over-the-road truck drivers who live without kitchens for weeks at a time - EVERYONE to understand and have access to real food.

Food is HUGE. I can't exaggerate it! People think nutrition is something that has long-term effects, that you eat broccoli so you don't get cancer someday.

So yes, work with your doctor. But... there's no reason NOT to ask for Niaspan instead of a statin. Heck, if he's a young doctor, he may not ever have heard of it. (Honestly though, lowering cholesterol without addressing inflammation scares me a bit - cholesterol fixes the damage to arteries, if your body can't FIX it, what happens? It seems to me that could lead to aneurysm. )

Every new doctor over the past few years has asked me why I take K-dur for my blood pressure. While insulin causing potassium loss is a basic fact they learned in biochemistry, they memorized and forgot BAZILLIONS of facts. When I remind them that fluid balance is based on the sodium:potassium ratio and that insulin causes potassium loss, they write me a new script without argument.

Previously, I posted about Invokana, which the nurse practitioner at my endocrinologist recommended to me. It is a new drug, and I'm suspicious of new drugs generally. I did a LOT of research before deciding to try it and I DON'T recommend it to most people.

You see, the nurse practitioner is not going to deal with any side effects of the drug. She is also not going to come to my home and stick that pill in my mouth every morning. The decision and the consequences are mine alone.

And my most important decision is the one to eat real food.