I have a few dead horses which I choose to beat. The MYTH and FEAR associated with discontinuing UNNECESSARY antibiotics, in the event of improperly prescribed (viral illness), or excessive diarrhea (antibiotic induced diarrhea-which could be dangerous C. difficile overgrowth), is one of them. 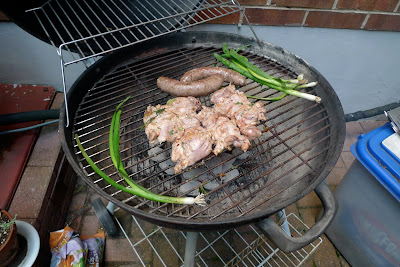 Food noise. It's everywhere. Every which way you turn, there's another diet, myth, "fact", or antioxidant savior. The… Continue

*Note, this document was for a friend and I thought I would share. Obviously not every single remedy will be for you, but perhaps there is one thing you haven't tried yet. Good luck! Love, Chris*

OK, so I made this document for a friend… Continue

For the Love of Fermented Foods

The first time I heard that people from traditional cultures eat a small amount of fermented foods at each meal, the information passed right by me. That’s fine for them, but I wasn’t about to start eating kimchi and sauerkraut with every meal.

The second time I learned about the wonderful properties of fermented foods, I was intrigued. It seemed…

Research the difference between naturally occurring calcium fluoride and synthetic sodium fluoride. The concern is instant teas, at worst. Not loose leaf tea.

Here is a lengthy article elucidating the differences: … Continue


One of the easiest and best techniques that I have found to help develop self-love and acceptance, ease fear and anxiety and boost physical wellbeing is Meridian…

What is Strep A?

A positive test result does not distinguish those people with an active strep infection from those who are carriers of strep bacteria but actually have a viral infection (rather than a bacterial one).…

I saw a lot about St Johns Wort both tincture and topically (oil).

Group B Strep and pregnant

‎"Interestingly, the Cochrane Collection reviewed the evidence in 2009 and recommended no treatment for GBS in labor in low-risk situations. You may want to discuss your baby’s risk with the midwives, and whether they still recommend treatment in your situation if you test positive.
http://www2.cochrane.org/reviews/en/ab007467.html "

Pros and cons of Hibiclens: …
Continue

Master Tonic to the Rescue!

Master Tonic looks like it cures everything and is easy to make and have on hand.

I've wanted to have some healthy placenta for about three years now.   Finding someone who'll share their placenta AND who has a pristine diet and health is another thing...


My wonderful friend offered to share some of her placenta when she birthed recently in exchange for the gift of preparing it for her in the traditional Chinese way.  (I'll include instructions below.)  I want to encourage women to consider embracing the benefits of placenta consumption…

Talk to me about irradiated foods! What about whole foods, "organic" foods, are they irradiated too? I've never seen Anything labeled with this information!

Apparently, they've been irradiating wheat flour (since 1963). And meat & poultry since the '90s. It is perfectly safe according to this "fact sheet" prepared... by the UW Food Irradiation Education Group - (an obviously objective…

Dairy intolerance is the number one cause of fluid build up in ears.

"In one study an astonishing 86% of the children tested became free of ear problems once they came off dairy food."
http://www.mothering.com/community/forum/thread/1175531/possible-ear-infection-and-breastmilk#post_14835039

"New research is suggesting that 80% of uncomplicated…

Thinking about removing your amalgams?

Thinking about removing your amalgams?

Consider these concerns before removal:

When to get fillings out, or not…

I believe we are meant to gain our nutrition from whole foods.

Dietary vitamin B6. B12, folate to decrease pancreatic cancer risk:

“Researchers exploring the notion that certain nutrients might protect against pancreatic cancer found that lean individuals who got most of these nutrients from food were protected against developing cancer. The study also suggests this… Continue

Mercury issues can be passed from mother to child, depending upon when mom's amalgam fillings were placed or removed, and whether mom's detox pathways are open or blocked. Nutrient deficiencies create blocked detox pathways. (And 50% of the population has a genetic predisposition to blocked methylation detox pathway with the MTHFR gene polymorphism.)

Most Americans have nutrient deficiencies, even and especially in the presence of multivitamin supplementation.… Continue

I'd focus on magnesium sources, Nettles infusions are great, as are Epsom salt baths and Epsom salt compresses for comfort. Food folate, again such as in the Nettles or green smoothies will help the PPD and natural detox pathways. Bone broths are another wonderful source of minerals to support the immune system.